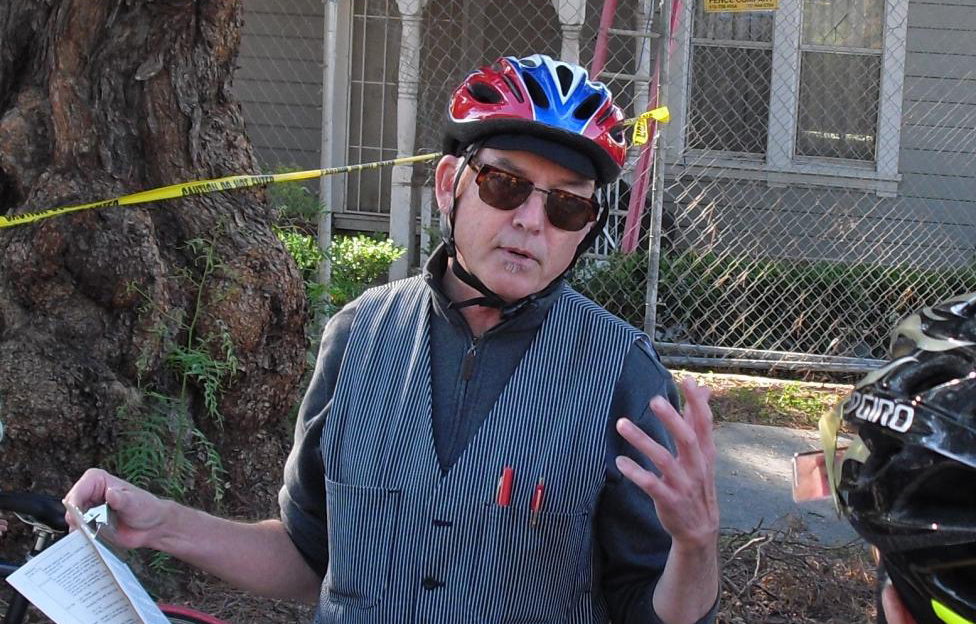 Interview of Ed Brennan, Consulting Arborist and resident of Benicia

My name is Ed Brennan, I’m 61 years old and live in Benicia, CA.

What drew you to Benicia?

Benicia has a combination of a smalll town village feel and being a walkable city near the water. This appealed to us.

How did you discover Benicia?

Friends of ours found a hike in the Sierra Club Newsletter by a German Hiking Club, and we participated. It turned out to be a tour of Benicia with docents from the State Capitol with us talking about the historic buildings — it was quite fascinating.

We lived in San Francisco and didn’t own any real estate. It seemed like a good place to start in the real estate market. I had lived in Pacifica in a suburban house and had two children. My wife died and I moved to San Francisco. Sally and I got together and we moved out here in 2000 after my kids were grown.

You have been in the tree business for some time?

For many years; I started in 1971 after I graduated from college.

What did you study in college?

My undergrad major was in anthropology.

How did you from from anthropology to trees?

I was just sick of college, sick of school, and I wanted to do something outdoors and this seemed to appeal to me…there was a lot to learn about trees and its kind of athletic to be a tree climber which was a fit for me.

You went from tree climbing to owning your own company?

I worked for several private tree services and then started my own tree service in San Francisco in 1979 and had that company for 16 years until I sold it and then just did consulting after that.

You are a Certified as well as a Consulting Arborist? What is the difference?

A Certified Arborist has taken a test and updates knowledge with continuing education to earn and maintain a credential. The Certification is by the InternationalSociety of Arboriculture (ISA). The other credential I have is from the AmericanSociety of Consulting Arborists (ASCA) which requires completing coursework, passing a test, and writing technical reports that meet the standard of the ASCA.

You had a leadership role in the ISA?

I was on the Board of the Western Chapter of the ISA. For several years, I managed their continuing education program and I rotated through all the leadership chairs including serving as President. I am a life member.

What does it mean to be a Consulting Arborist?

People hire me to give them advice on trees. I have two categories of clients: one is generally interested, homeowners, etc., who want information about their trees, usually having to do with managing problems with the trees. The other group are property developers who are required by ordinance to have a tree preservation plan as part of the their development.

Sometimes Consulting Arborists get pulled into court too?

I have served as an expert witness quite a few times for disputes, usually neighbor disputes revolving around trees.

Most people think trees are benign characters that are not very controversial.

Trees can bring out strong feelings in people – both positive and negative. Sometimes city government gets involved–very often these involve view issues. State laws are involved, so this can be difficult to navigate through.

Turns out you are not a one trick pony…you have some other interests and passions?

I’m also interested in bicycles. I’ve been a cyclist my whole life basically and I’ve started making bicycles shortly before I moved to Benicia.

What kind of Bikes do you make?

Is this sort of retirement job for you?

It’s a hobby–I don’t make money at it.

How do trees and bicycles go together?

They are both green if you think about it…they are environmentally friendly and beautiful!

You have combined these interests into a bicycle tree tour?

I have done two bicycle tree tours in Benicia which were free, fun and well attended –open to anyone who wanted to attend.

You are also an active member of the Benicia Bicycle Club?

Yes, There are over 100 people involved with the Benicia Bicycle Club.

It seems like whenever I travel around Benicia, people know you. Are you and Sally active socially?

We are–especially my wife Sally.

What do you do around town?

We get people together to do wine tastings, go to the Trivia Contest once a week, and get our friends to come and support the local businesses that way.

How did you get involved with the Bencia Tree Foundation?

I was asked to be on the committee that wrote the current tree ordinance. After the group got the ordinance passed, they were on their way to form the  Benicia TreeFoundation and I thought it would be appropriate to get involved at that time…a good way to build community and relationships within the community–what better thing to do than plant a tree? I remind folks that there were no trees in Benicia prior to humans settling here and that previous generations had the foresight to plant trees and that trees are important members of our community and we need to keep this work going.

Is there a tree density that we should be striving toward? Forty-percent is considered a threshold, according to some research, to achieve maximum benefits from the tree canopy.

Yes, we need the denser canopy to cool the city because the landscape intensifies the sun’s heat. We benefit from the cooling effect of the trees in addition to the the benefits of managing stormwater runoff. In my consulting work with developers, I have noticed how the state is now requiring features such as “bioswales” to manage runoff by filtering and reducing the runoff from rooves and parking lots. That’s a big change from just a few years ago when all that runoff was sent into the drains and the bay, carrying pollution with it.

How do people reach you Ed?

Urban Forestry Organizations in the Bay Area and Beyond