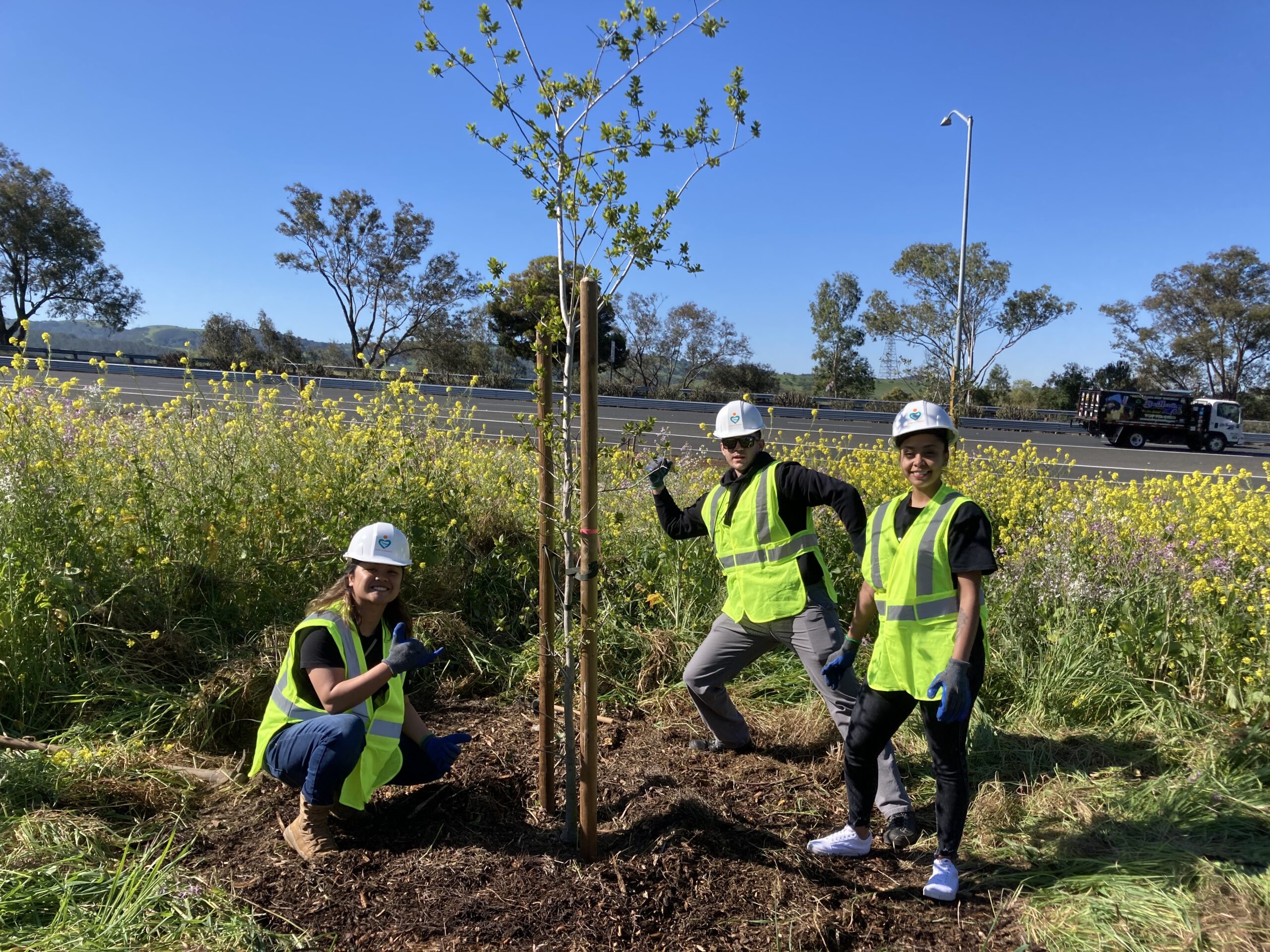 This week volunteers surveyed the trees planted by the Benicia Tree Foundation along I-780 to inform our plans for upcoming Tree Care Days at these locations.

Four of the 22 trees planted at the Military West offramp in 2020 have died.  We plan to replace three.  The 19 remaining trees are growing reasonably well.  They need to be weeded, watered and mulched.  There are also four Blue gum eucalyptus stumps that are sprouting.  The sprouts need to be cut off so the trees don’t re-establish themselves and crowd out the native trees we planted.

The news at the Columbus Parkway offramp location is not good.  Thirteen of the 21 trees planted in 2021 have died.  The remaining trees were found in a range of conditions, from “good” to “struggling”.   We were afraid this might happen when we planted the trees at the end of the wet season in April.

There was a snafu purchasing the trees so we had the choice of planting the trees in April, or holding the trees until the fall to plant.  We choose to plant the trees in April which made supplemental irrigation during the dry season a critical task. Three Tree Care Days were scheduled to water these trees during the summer, but one was cancelled.  The trees did not get enough water.  Unlike the trees at the Military West offramp which were relatively large and planted from five-gallon containers, these trees were small saplings planted from one-gallon containers.  Their root balls dried out quickly during the hot summer.  They were less able to endure the heat and sun.

We plan to replace the trees that have died and plant trees in six new locations at the Columbus Parkway offramp. The growing trees will be weeded, watered and mulched.  We also will install jute cloth over the top of the tree cages to provide some shade from the hot sun for these young trees during the next year or two.

Additional tasks at the Columbus Parkway offramp include controlling some of the invasive plants that are trying to establish themselves.  Seed pods from several clumps of artichoke thistle and jubata grass need to be removed.  Some Himalayan blackberry vine stems need to be removed from one tree.  A task for both freeway offramps is to pick up some of the trash found there.

We will need alot of volunteers to help with these tasks.  The next Tree Care Day at these locations is scheduled for Saturday, December 3 at 9AM.  Since this is Caltrans right-of-way, volunteers must be at least 16 years of age.  Any rain cancels the event.  Click here to register for this event.  For more info, call us at 707-745-4546 or email us at info@beniciatrees.org