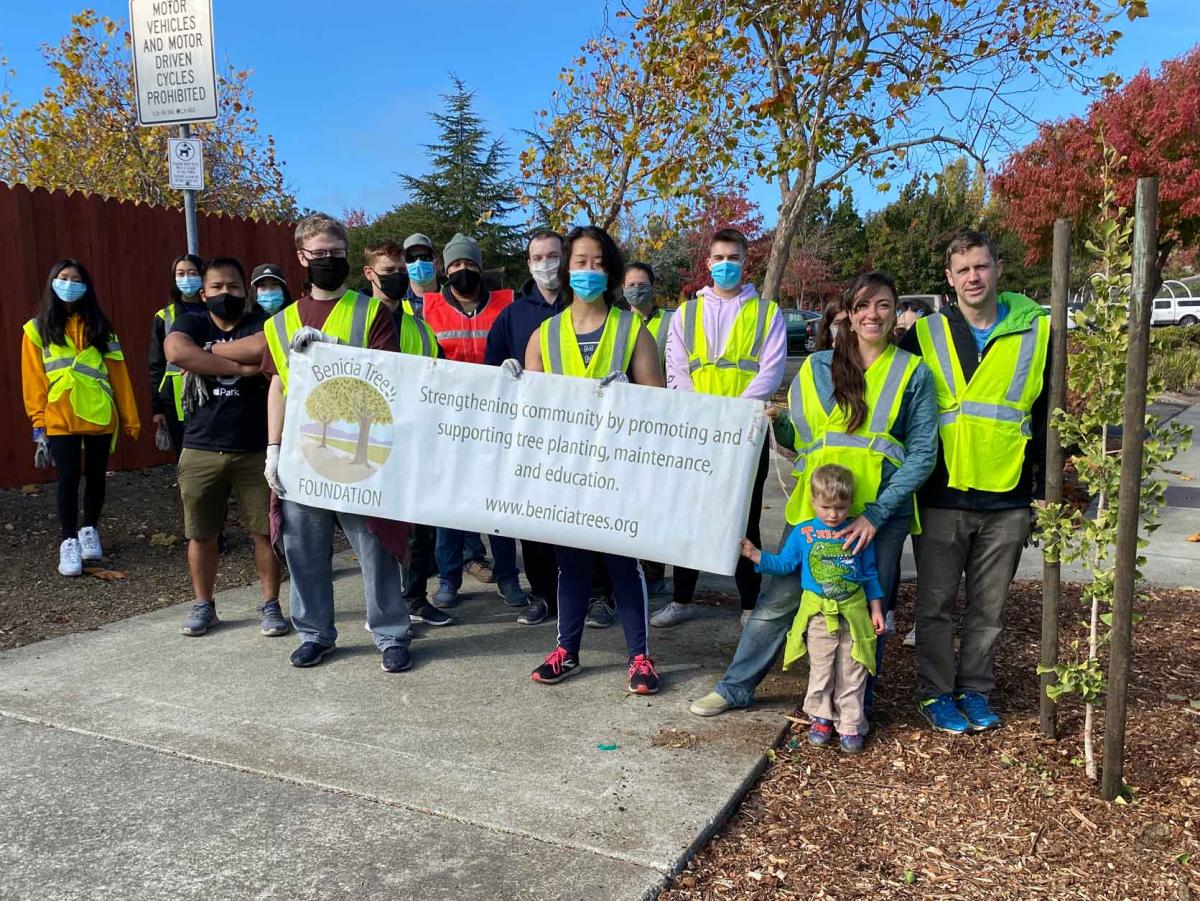 The volunteers gathered at Jack London Park where they received a safety briefing by Steven Goetz, member of the Benicia Tree Foundation Board of Directors which sponsored the event.  They were then greeted by Mayor-Elect Steve Young, who thanked the volunteers for their service to the community.

The tree species used for this project included Chinese Elm (Ulmus propinqua ‘Emerald Sunshine’), Red Push Pistache (Pistacia x ‘Red Push’), Muskogee Crepe Myrtle (Lagerstroemia x ‘Muskogee’) and Maidenhair (Ginkgo biloba ‘Autumn Gold’).  Goetz explained why these tree species were being used on Rose Drive and demonstrated how to plant a tree.  Most of the tree species selected will not only display fall color, but will grow to a large size shading the pavement and slowing traffic on Rose Drive.

Armed with the necessary tools and training, the volunteers spent the next two hours digging holes, and planting, mulching, watering and staking the trees.  After the trees were planted, the Travis Air Force Base group returned to the park to make gopher baskets for trees that will be planted in the Lake Herman Open Space on November 19th.  The event ended before noon.

“After being cooped up this year, it felt really great to get out and do something with my troops.  It was great not only to volunteeer time, but also to use it to bond as a unit,” said Technical Sergant Vincent Pinkey, who leads the network infrastructure shop at the Travis Air Force Base 60th Communications Squadron.  “Most of us expected small saplings and for it to be a lot easier, but at the end, one of my troops told me how much fund he had and it went much better than expected for all of us.”

This project was made possible with the permission of the City of Benicia, which also assisted with digging and supplied the water and mulch.  Trees were funded by donations to the Benicia Tree Foundation.  Benicia residents Debra Lam and Lionel Largaespada donated one tree each.  Solano County Supervisor Monica Brown donated five trees, and the remaining eight trees were donated by Sindy Harris, also a Benicia resident. 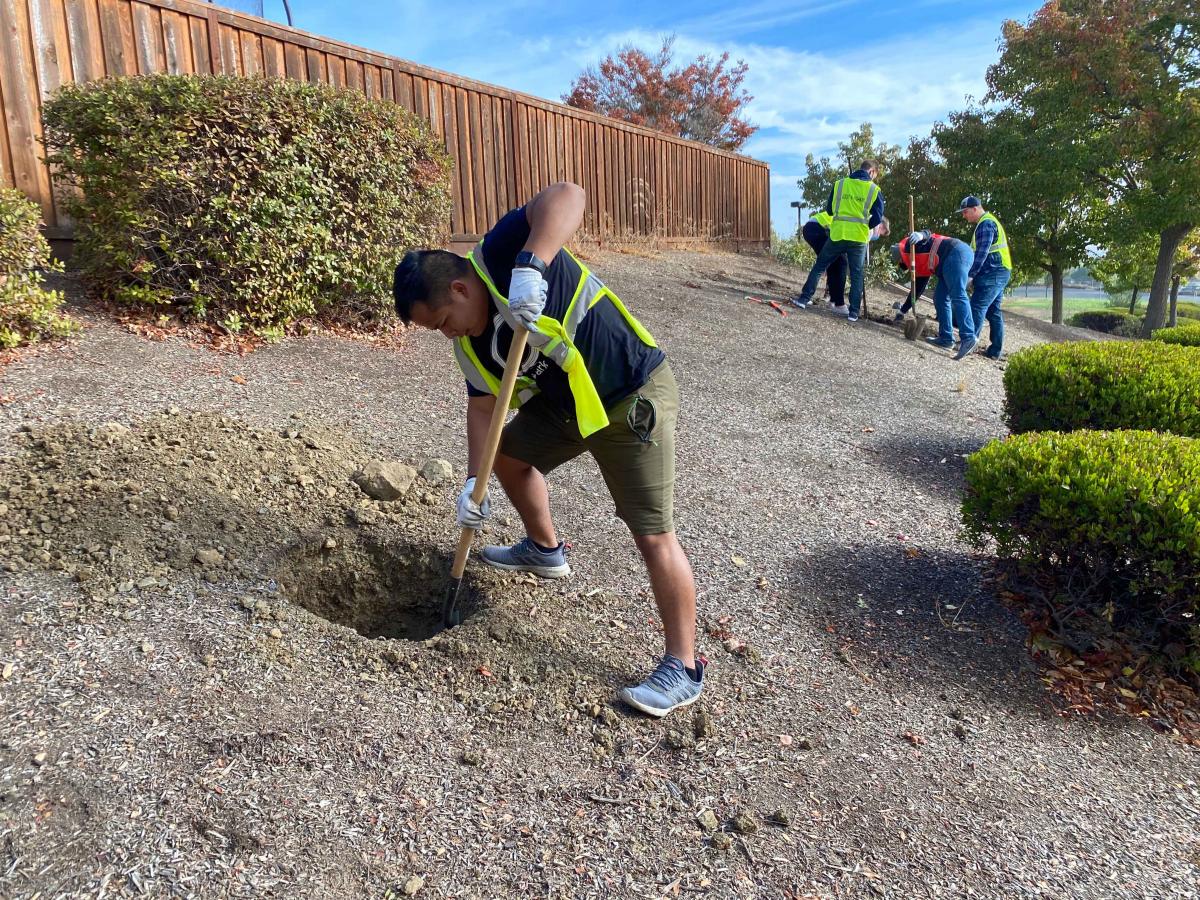 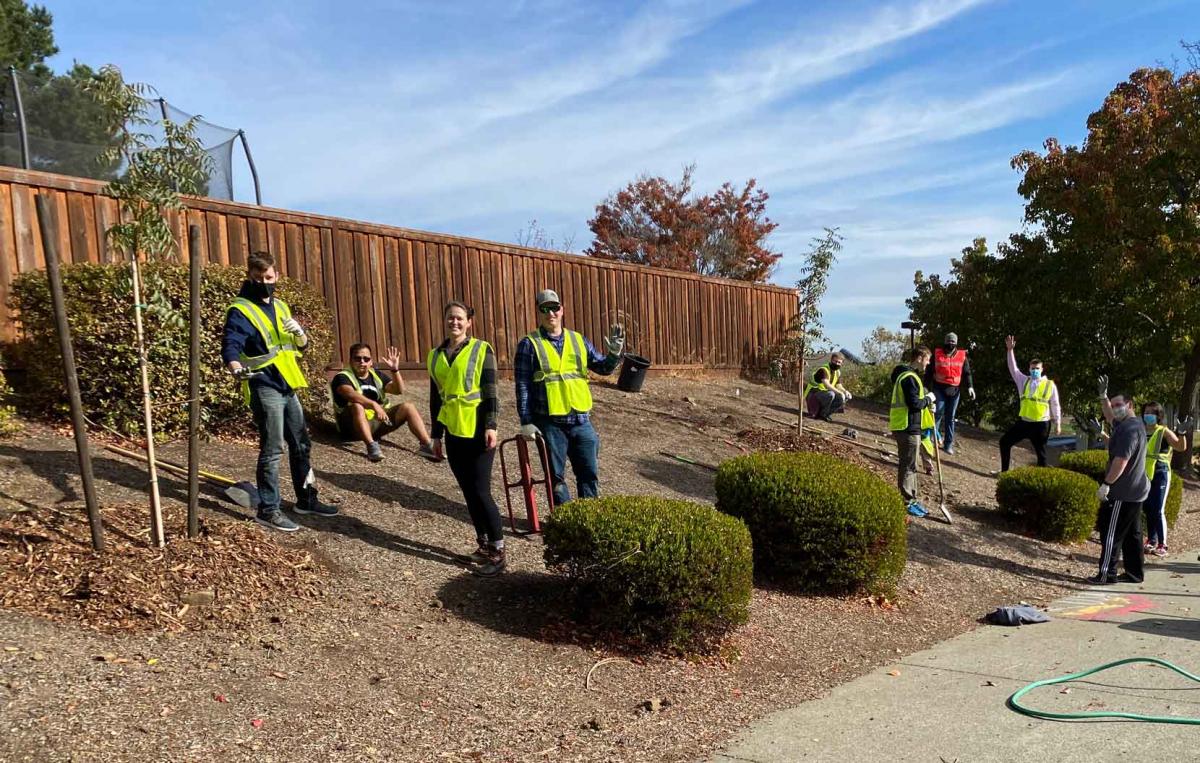 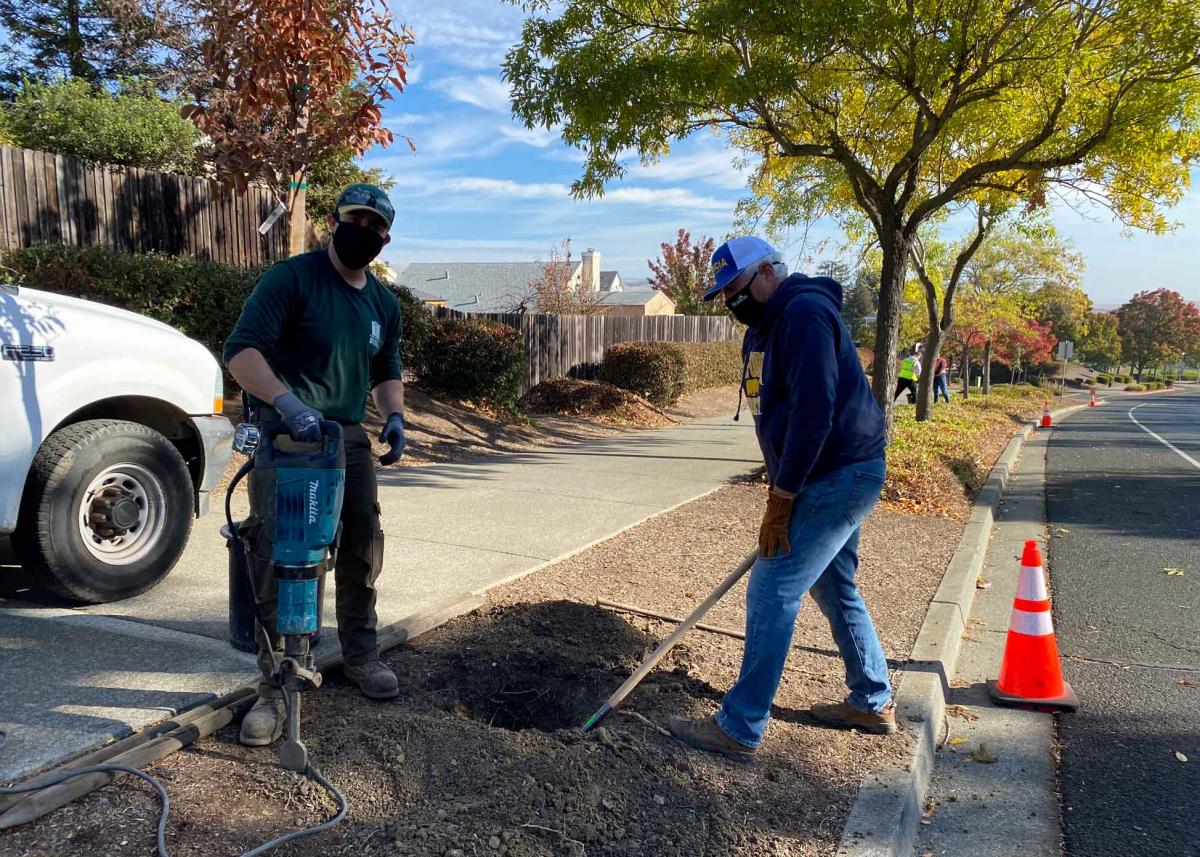 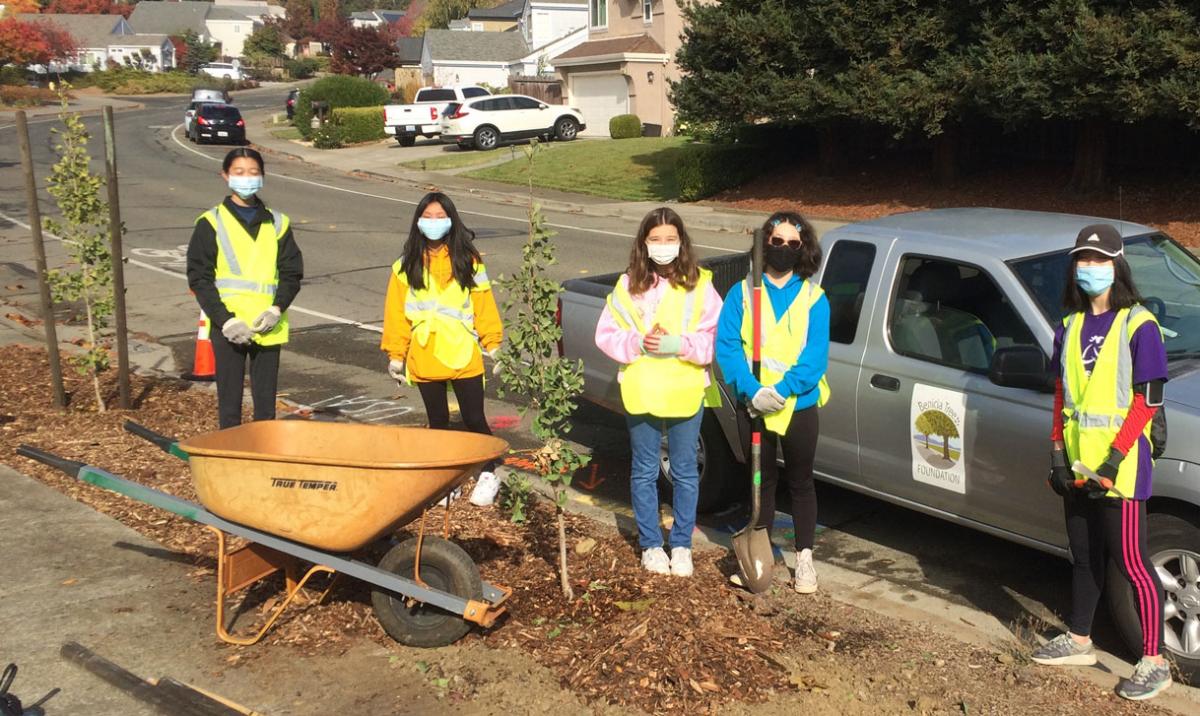 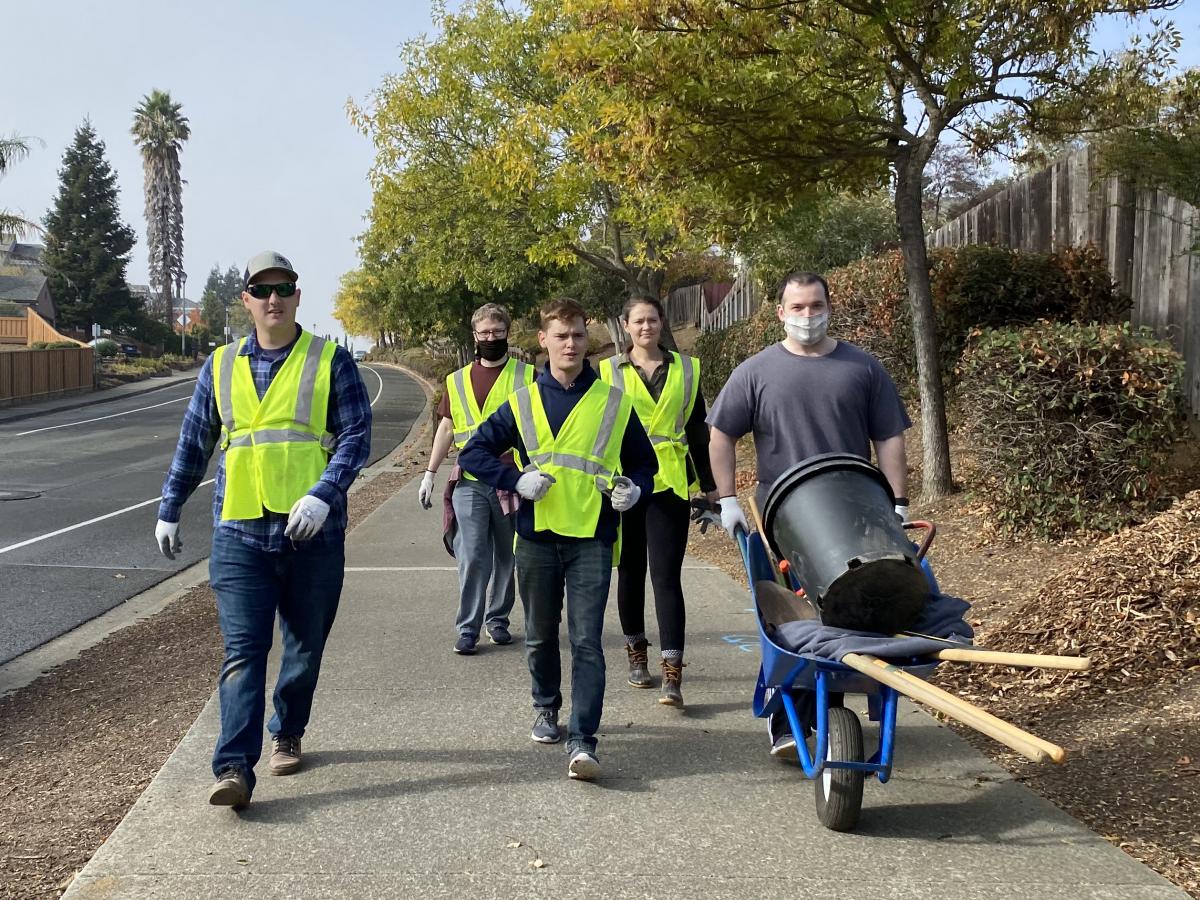 Volunteers from Travis Air Force Base move equipment down the Rose Drive trail for tree planting. 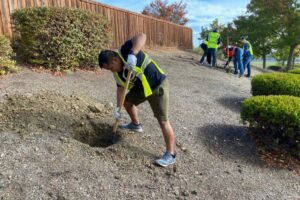 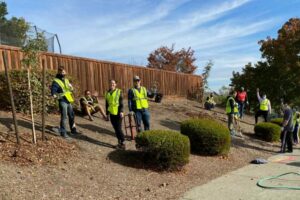 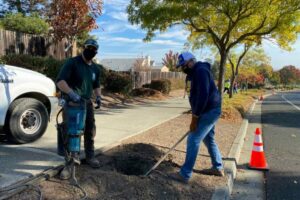 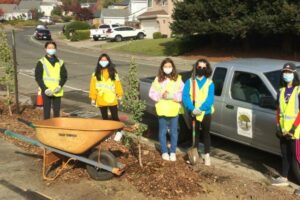 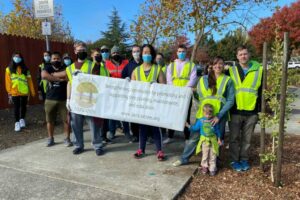 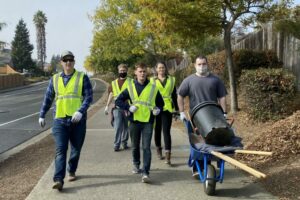